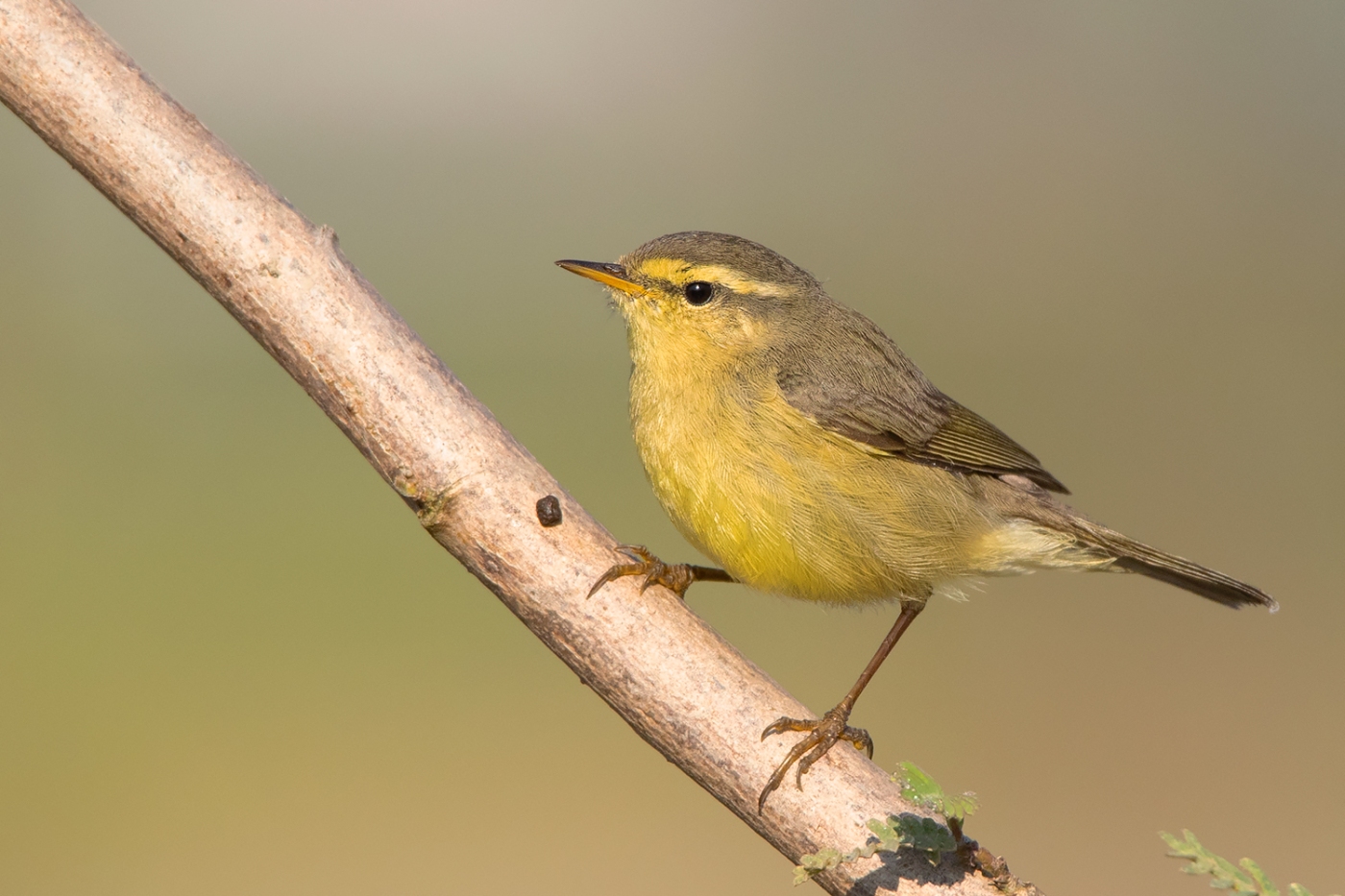 In the evening of 1 January 2021, I decided to visit Mae Faek paddies with the aim to get some nice photos of common farmland birds. It was a very pleasant evening with nice cool winter breeze and really nice lighting. The condition was perfect for photography. While I was enjoying some nice views of the local Plain-backed Sparrows, I noticed a small warbler foraging in a mimosa tree in the background. I snapped a few shots of the warbler and checked the photos to see what it was. To my surprise, it was a Tickell’s/Alpine Leaf Warbler, a very rare bird in Thailand! I ended up spending that evening following it around until sunset. It certainly became one of the most memorable New Year’s days I’ve ever had.

After my first encounter, I visited the site almost daily to observe it. The bird proved to be very territorial. It spent most of the time foraging in a small area of mimosa trees surrounded by a paved road. It sometimes flew over a short brick wall to feed in a larger area of mimosa trees on the southern side, but usually returned to its main territory within less than an hour. It was quite clear that the main reason for it to stay in such a small territory was the abundance of food. There seemed to be some sort of insects that emerged from the mimosa trees daily in the evening around 5 PM onward. To me, they looked like flying ants but I really can’t be sure. Once these insects came out, the bird became very easy to approach and photograph.

The bird was last seen on 20 February 2021 by Chintana Suwawan, a Chiang Mai birder. Even though it stayed around for nearly 2 months, its identity was never completely solved as the identification of Tickell’s/Alpine Leaf Warbler away from the breeding ground is not well understood. I got some recordings of the sub-song that it made. The sonogram looked a bit more like Alpine Leaf Warbler, but it was hard to be sure. Fortunately, a paper on bioacoustic, morphological and phylogenetic data which came out in 2019 has suggested a lump between Tickell’s and Alpine Leaf Warbler, and the lump was finally accepted in the latest IOC Checklist in 2021. I’m pretty sure that other checklists will soon follow and only Tickell’s Leaf Warbler (Phylloscopus affinis) will remain as a species.

This bird that I found at Mae Faek is the third confirmed record of this species in Thailand. The first record was a bird from Hang Dong, Chiang Mai found by Thammarat Kaosombat on 17 January 2020, then followed by a bird at Mae Rim, Chiang Mai on 9 December 2020 by Nitaya Jotikasthira. After I found the Mae Faek bird, another bird was also seen and photographed by Jens Toettrup at Pong Daeng, Tak on 31 January 2021, making the total of 4 records of Tickell’s Leaf Warbler in Thailand so far. All 4 records were from similarly open area with sparse shrubs and trees in lowland. I think habitat and elevation can certainly be used when identifying Tickell’s and Buff-throated Warbler, as the latter is only found in open forest on high mountains. Apart from that, Buff-throated Warbler also has a more buffish overall plumage (instead of lime-yellow) with more black on the lower mandible. I’m already looking forward to seeing more records of the Tickell’s Leaf Warbler in the upcoming winter, as it seems to be a regular but criminally overlooked species here in Thailand.